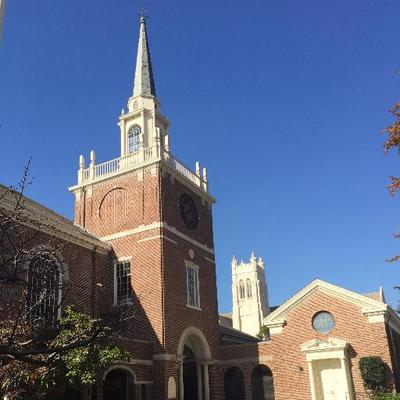 On November 7, 1872, University of California President Gilman, in his inaugural address, held out a welcoming hand to all who would establish, adjacent to the University, halls in which the best moral and religious influences could be promoted. He asked:

“What church, what association, what individual will be the first to establish such a hall?”

On February 23, 1873, just three months later, on the 24th anniversary of his arrival in California, the Rev. Dr. Samuel Hopkins Willey responded to President Gilman’s call in a major public address:

“We must go there and build halls and churches and homes, and must make them so attractive that the students cannot stay away from them. The surrounding Christian influences of the state should take the University into its care and heart.”

On the last Sunday of June of 1874, the first service was held in the Berkeley Hotel on the corner of Bancroft Way and Telegraph Avenue. Twenty persons attended.

steepleIn July, a Sunday School was organized and in early August of 1874, we appointed our first committees (something we have since become very good at) including committees to select a site, to frame a constitution, to organize the church and to solicit money.

On March 22, 1875, FCCB worshiped for the first time in its new chapel on the southeast corner of Telegraph Avenue and Dwight Way. Among the subscribers to the first building fund were Anson G. Stiles (after whom Stiles Hall is named) and Professor Joseph LeConte.

On Sunday, June 12, 1882, our historic bell, Berkeley’s First Congregational bell, called the people to our service for the first time from its tower on our church lot.Our congregation grew quickly. Soon, we purchased a lot on the northeast corner of Dana and Durant and there constructed a new and much larger building, Berkeley’s first true “church.”

On the first Sunday in June, 1884, the new building was used for the first time, for a praise service. The architect was Clinton Day, the son of Sherman Day, one of the original trustees of the College of California.

In the evening of Sept. 30, 1884, the new building was dedicated. One of the speakers at the dedication services was President William T. Reid of the University—and a member of the church—on “The College as the Ally of the Church.” Among his notable remarks (slightly edited) were these:

“The church and the college have enough identity of purpose to warrant their meeting on a common platform. The world looks for guidance to enlightened intellect, but its sore need is tenderness of consciences. It needs the clarifying power, but more the vitalizing.

We continued to grow and in 1916 and 1924 purchased land adjacent to the original property purchased in 1884.The Reverend Doctor Oswald W. S. McCall become our Minister in January of 1922 and our membership doubled and doubled again.

At a memorable Sunday service on March 26, 1923, two years prior to the dedication of our present Sanctuary, FCCB’s members and friends placed over $100,000 in cash and pledges on the altar of the old church to build a new church.

On August 30, 1925 we “rejoicingly entered” our new Sanctuary—the one we presently enjoy. At the services held during the dedication period which extended through September 27, 1925, two distinguished academicians spoke: David Starr Jordan, Chancellor of Stanford University, and William Wallace Campbell, President of the University of California.

For seventy-two years our Sanctuary has superbly served its parish and its community—for worship services, concerts, lectures, and as a gem of New England Architecture. Dui vivant (long may you live). As stated in one of the September 1925 dedicatory talks,

Prepared at the request of the 125th Anniversary Committee by James M. Spitze, March 15, 1997