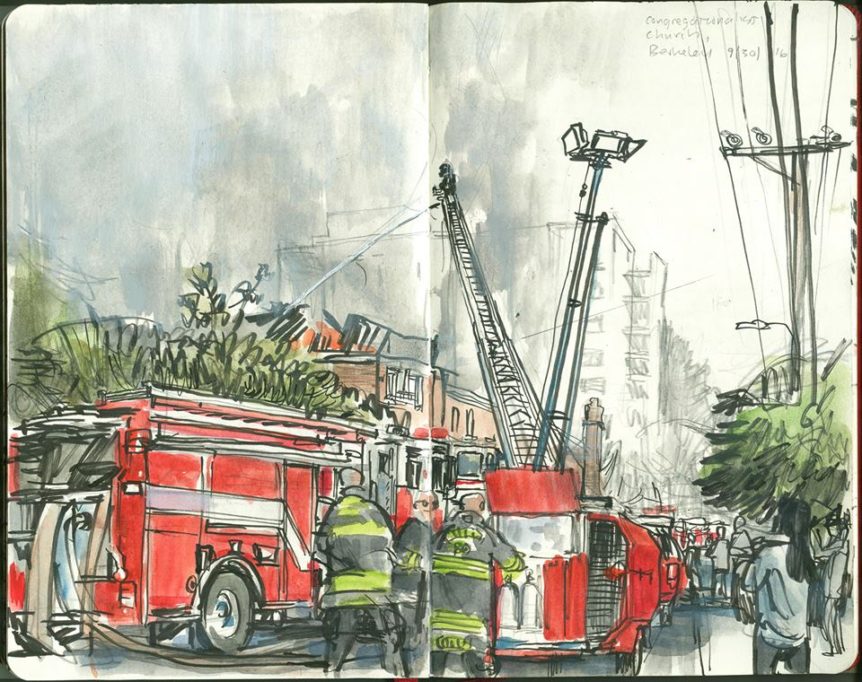 by Moe Wright, Church Treasurer, for the Blue Fire Committee

For those who attended the Blue Fire presentation on April 26,  you will recall that the committee had three recommendations:

There are two paths for approving the recommendations: The recommendation to pay the balance on the BPF loan was also a recommendation by Stewardship, Finance and Administration (SFA) to the Council. The decision to accelerate the payment of this debt is within the power of the Council and they took action to repay the loan on April 28th in order to immediately reduce costs to the church. The other two recommendations will be put to a vote by the Congregation. The Blue Fire Committee is asking for a vote on both recommendations in one resolution. Why is this?

Here is a look at the process it took to form the recommendation: The Blue Fire Committee was assembled with members who represent a diversity of backgrounds and opinions and we approached the resolution of the dilemma that was our charge from many points of view. Our initial direction was to rebuild Pilgrim Hall more or less the way it was, with code upgrades and modernization. That goal proved to be unachievable given the amount of the insurance settlement, and we went back to the Congregation with a new charge: to look at the whole campus for solutions with the financial health of the church in mind. The committee agreed to find a solution that contributed to the long-term health of the church and meet our programmatic needs.

We started looking at the task at hand through the lens of the long-term solution to the overall finances of the church. We have faced deficits for the last few years and adjustments have been made. The church budget projections used by SFA were considered and these calculations showed that we anticipated significant, increasing deficits caused by the shrinking of our congregation and the increasing costs of operating in the Bay Area. We realized that without action, the operations of the church would be severely threatened. Each solution was vetted for its effect on the income and assets of the church as well as the programmatic, aesthetic, and practical attributes.

Two years ago, the church had discussed an affordable housing building to be built on three lots encompassing the north parking lot, Durant House and the play yard. This process was paused until September of last year. In order to honor that process, Blue Fire decided that the question of whether and how to incorporate a housing building on our campus should be considered as part of our deliberations. First, we considered alternate uses. The property is zoned for multifamily residential so unless we were willing to endure a great deal of city process, we accepted that some type of residential building was the best achievable use. In valuing the land, we checked with a number of sources. Whether it was developed as a for-profit apartment building or affordable housing, the value was the same. Affordable housing is more in line with the mission of the church and has the support of the Congregation.

We considered a multitude of combinations that would benefit our church. We parsed out owning and leasing lower floors of the affordable housing building, moving the boy’s school into it and moving into Plymouth House, not building on the old Pilgrim site and putting all our functions in a building on the north parking lot. Most of these solutions did not pencil out. In addition, we concluded that a drive through from Channing to Durant was necessary to maintain adequate remaining parking. This made the available site for an affordable housing building smaller than the Blue Sky Committee had envisioned. This was a compromise on the affordable housing proposal that the church considered in 2017.

We ultimately decided that the best use for the two north lots was to monetize them for the short- and long-term benefit of the church and not to occupy any of the building except reserving an apartment for a church caretaker. This meant that the balance of the church program needs should be placed in a Community Building on the old Pilgrim site. We found that the concept was feasible after working with our architect and contractor. The solution worked: church finances stabilized and enhanced and a brand-new building with the functions necessary for our church to thrive.

We see the solution that we have presented as a package. Building the new building without monetizing the two lots means we have a brand-new building but with an underfunded congregation that is moving into it. Selling the land without building the Community Building means we have a well-financed congregation with inadequate facilities. This is a proposal that the whole, diverse Blue Fire Committee did agree upon and we pray that the Congregation will come to the same conclusion. We are faced with a complicated set of circumstances and we are called to make decisions that further the life of the future church. The Blue Fire Committee believes that the proposal that we have placed before the Congregation takes advantage of the opportunities we have been given and avoids foreseeable missteps.